A few days ago, I read a book that both touched my heart and lit it on fire.

Skye Warren’s Trust In Me tells the story of young woman named Mia. For years, she has remained  wedged firmly in the midst of a human trafficking ring owned by a vicious man who pulled her from the gutter and, on a daily basis, tortures and violates her at the various turns of his twisted whims while permitting others to do the same. The only thing that makes her stay is a crucial task involving undercover FBI agent Tyler Martinez that, should said mission fail, would destroy so much more than her life. 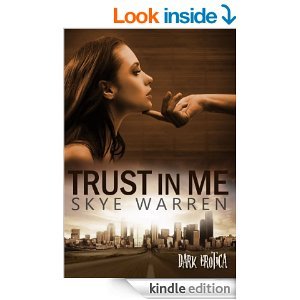 I won’t give away everything because I do believe you should read this. Its been said that everyone has a story. Everyone you meet is going through something so be careful how you treat them. Not just that, but it shows you that people are worth fighting for. Just because something isn’t happening to us doesn’t mean that it should be written off.

This book illustrates those lessons and more.

So do yourself a favor and check this out. Skye Warren is not only a master of words but a compassionate demonstrator of the human condition.

Trust In Me is one of the ugliest, most beautiful, most terrifyingly-crushing, and powerful bodies of work I have ever read.

P.S. These are just a few of the many organizations working to end human trafficking. Check out the sites to see how you can take part.

This organization seeks to end human slavery in the USA and abroad.

According to their mission statement, “Not For Sale equips and mobilizes Smart Activists to re-abolish slavery — in their own backyards and across the globe. Not For Sale believes every individual has a skill they can contribute to fight human trafficking, and together we can end slavery in our lifetime”

Uses technology to unite organizations, communities, and individuals and say “NO” to human trafficking

The Redlight Children Campaign is a non-profit organization created by New York lawyer and president of Priority Films Guy Jacobson and Israeli actress Adi Ezroni in 2002, to combat worldwide child sexual exploitation and human trafficking. Its mission is to decrease the demand side of the international sex trade through legislation and enforcement while raising awareness utilizing mass media and grassroots outreach.

Through its partnership with Priority Films, Redlight Children has recently launched the K11 Project—three films which attempt to expose real life experiences of the underage sex trade.