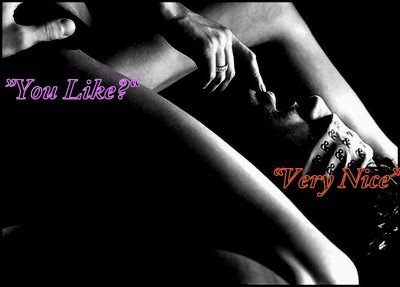 “I have something for you.”

She blew the words into his ear, bringing the hairs on the back of his neck—among other things—to attention.

In an instant, his fingers laced in her full brown hair and his red-hot lips were on hers again.

“Really?” he asked between kisses. “There’s more to this welcome-home present?”

“Absolutely. And you can thank me when you unwrap everything.”

“Everything?” he emphasized wickedly.

“Everything,” she affirmed, just as suggestive.

She turned her head and his mouth met her neck.

He worked at it with his lips and tongue.

He ‘d been away on business for the past week and a half.

She picked him up from the airport and they headed to dinner from there.

They talked about the trip and the business matters he left to tend to for hours at the restaurant and on the way to the beach, where they’d taken a midnight stroll along the sand.

Now, they were too ready to get reacquainted.

“I think I do,” she laughed, tearing his white dress shirt, sending a couple of buttons flying.

She ran a hand down his broad chest to the crotch of his pants.

His groin strained against the fabric and he moaned under her soft touch.

He hauled her to his bare chest, melding her body into his while he removed the sleeves of her sash dress from her shoulders.

The zipper at her back popped in the process and uncovered the lavender lace bra that strained against her full breasts.

“That’s new,” he commented on the underwire.

All too willing, he took the bait.

Kneeling in front of her, he skimmed the lace with his lips then his tongue, tugging the dress down to her feet.

Biting her bottom lip to stifle the heat rising within her, she ran a hand through his thick black hair, stepped out of the puddle of her dress, and kicked off her pumps.

He pulled down the cups of her bra then took one nipple, dark and taut, into his mouth while kneading the other.

Ever so often, he’d switch the roles of his hands and mouth, licking, suckling, biting, and teasing until she cried out his name, tremors shooting through her.

“Slow down,” Jon murmured against her skin.  “We’ve got all night.”

After freeing her of her lace bottoms, warm lips traveled to her navel and his teeth lightly scraped along the trail.

She tried to speak.

Only a sharp exhale escaped her as the stubble of Jon’s black goatee prickled her abdomen and his hands left her breasts for the small of her back and the juncture of her legs.

The hand between her probed, expertly and intimate.

“You were saying?” he teased then cupped her round bottom.

Suddenly, they were back on the bed, frantic hands and mouths devouring each other.

Beneath him, she undid the belt in his pants and tossed it to the floor with her dress and shoes.

Somewhere along the way, he removed the remainder of his own clothes, never taking his eyes from the woman who had stolen his heart.

Wearing only a bra that now hung low around her breasts, she stared into his delighted green eyes, running her hand through his hair again; her rings almost tangling in the smooth black tresses.

“I love you more,” he replied, echoing the words from his and her wedding day a year ago.

Jon kissed her lips a few more times then sat up and lifted her onto his lap, her long legs circling his toned waist.

Finally, he thrust into her.

Staring straight into his eyes, she held fast to his back; her long nails dug into his rugged muscles.

“Lee Ann? Are you all right?” Jon asked, concerned as he quickly pulled out of her.

They were still learning each other’s bodies and her reaction scared him.

She never did that before.

Lee Ann only smirked then maneuvered her lips and tongue on his Adam’s apple to bring him to the brink of passionate madness.

“Why’d you stop?” she said against his wet skin.

“Sorry,” he said, pulling her closer and claiming her once more in one quick motion.

Lee Ann pushed Jon onto his back and straddled him to deepen the pleasure.

She bucked, but his strong grip over her hips and back was secure as he moved in and out of her.

Taking advantage, he leaned up and took her voice with a kiss of fire and promise, exploring her lips and more.

A hoarse and hot “I love you” passed through his mouth to hers in sweet agony.

He dived in again.

Harder and faster until their words disappeared in jagged breaths and rock-hard skin turned to moist flesh.