Hi all!
Today, I welcome Cynthia Polutanovich, author of “Corpses Rarely Wander: How I Became a Loveless, Trailer Park Nomad.” 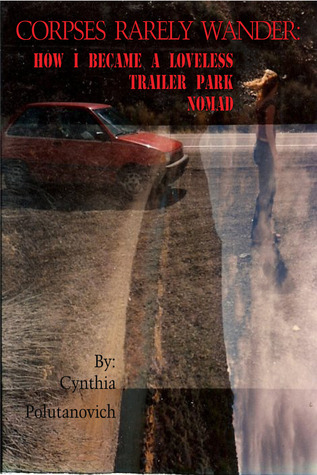 As part of “The Next Big Thing Project," a traveling post where writers answer questions about their works in progress and tag others to do the same, Ms. Polutanovich answered questions concerning her work and has allowed them to be featured here.
Ladies and Gentleman, the next big thing… 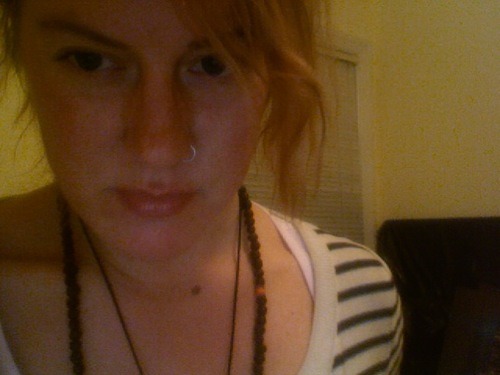 What is the working title of your book?

Corpses Rarely Wander: How I Became a Loveless, Trailer Park Nomad
What genre does your book fall under?
Literary nonfiction/ memoir/ old school memoir.
1) It’s literary nonfiction because I don’t like the category “memoir” and because, as much as my brain was prodding me to write my personal story, my primary focus from the beginning has been to write something beautiful – a good piece of literature. I don’t like the idea that people try to frame memoir as therapy. It’s not; or it shouldn’t be. It’s literature. If it’s not, we’re not doing it right. To be frank, I think that’s just a way of denigrating the art form because it’s become such a bastion of minority writers: women, folks of color, queer folks, people coming from underprivileged backgrounds. One of the reasons I chose to frame the book using fake psychoanalytical interactions is because I’m playing around with that popular critique of modern memoir as just being the author doing self-therapy.

2) It’s memoir because that’s what most people will call it.

3) It’s old school memoir because my greatest influences have been the old nonfiction – some of which posed as fiction: Jack Kerouc, Henry Miller, Hemingway – and some of which didn’t, like Diane DiPrima’s Memoirs of a Beatnik and her Dinners and Nightmares.

What is the one sentence synopsis of your book?

As I was answering these questions, I saved this one for last. It’s a question that torments me, the answer to which usually ends up being chock full of semi-colons, colons, dashes and parenthesis. I still haven’t figured out how to say it in one sentence, so I guess I won’t.

The themes addressed are social class, cultural mores, religion, traditional gender roles, romantic love/ sex, and mortality. Most of the biggies. It’s a story that follows the narrator growing up in a trailer park, witnessing the illness and death of her loved ones, leaving home at age fifteen, leaving the fundamentalist church at age eighteen, and then going out into the world seeking happiness, beauty, and love. All of this occurs in a motif of wandering and questing. The story moves from Michigan to Maryland, to West Virginia, South Carolina, Nebraska, and the mountains of New Mexico, where she lives on floors, in teepees, chicken wire shacks, and school busses.

Regarding the tone of the book, perhaps because of my deep love of Woody Allen movies, I wanted to go with a very conversational writing voice that allowed me to maintain a light, sometimes humorous tenor to the book even while dealing with heavy themes.

How’s that for not one sentence?

Where did the idea come from for your book?
From age 13-33, I only wrote poetry. I was actually in the middle of preparing applications to apply to graduate school in poetry when I heard a speaker in a “Professional Writers” class who completely changed my direction. He was a guest speaker, a professor of nonfiction writing. He shared with us a memoir piece of his own, and I liked it. Then, he went on to tell his own story of how he had once been singularly a poet, until one day he took a course in creative nonfiction writing and realized how exhilarating it could be to take all that he knew about language as a poet and stretch out into full sentences. That’s when he realized he had stories to tell. It was one of those moments in life that later seems fated. Within three days, I switched plans and began searching for graduate programs in creative nonfiction. Then I began working on my writing sample, telling my own tale, stumbling through my first real attempt at prose. Thankfully, the professors at Hunter College took notice of my strange style and invited me to join the program.

Also, as mentioned, the book is framed by three, sort of absurdist, fictional sections where the narrator (me) has conversations with a fake Freudian psychoanalyst. That idea came to me in graduate school as I was writing a paper on a Freudian interpretation of Nabokov’s Lolita. From there, I became interested in looking at the trajectory of the book in terms of cause and effect. In this case, childhood is the cause, and adulthood the effect. I found that I needed a premise that basic in order to tame how complicated the piece was. In addition, as I mentioned above, the idea titillated me because it allowed me to utilize the notion of therapy in a way that served my writing needs while at the same time, it let me poke fun at the idea of memoir as therapy…Besides that, it was just a sort of strange, almost surrealist idea, and that suited my sensibilities as well.

How long did it take you to write the first draft of your manuscript?

From when I first began the piece as my graduate school application, to when I had my first full manuscript, it took me 3 ½ years. Then I revised for another 2 ½ years. But I’m a truly insane re-writer. Since for 20 years, I only wrote poetry, I revise like a poet – sitting with every phrase and word, rhythm and nuance. I get very micro about it. That’s a very time-consuming way to revise a 320 page manuscript!

What actors would you choose to play the part of your characters in a movie rendition?
I don’t think I would ever agree to have this made into a movie. I’ve seen too many of those efforts come out of Hollywood already, and I don’t think I could stand it. Maybe if Gus Vansant and Wes Anderson did a collaborative directorial debut, and John Williams scored the film, and I was able to play the character of myself…Maybe then. But probably not. Total book purist, fascist, egomaniac, control freak, I guess.

Who or what inspires you?

People who are devastated by loss and get back up again with an even more open heart than they started with; people who are afraid but take risks anyway; people who never compromise their ideals in the way they live their lives; people who are willing to be un-cool enough to be very kind; funny people; old books – anything from 1970’s Tom Robbins back through the beats, the ex-pats of the 20th century, to Shakespeare, Edmund Spencer and then Ovid; looking at the paintings of Willem de Kooning while listening to David Bowie; watching Thelma and Louise before a road trip; honest conversations over wine or tea; Opera; Hinduism and Tantra; thunderstorms rolling in over blue mountains or the grey ocean; my muse to whom I pray ardently and often with great humility.

* You can get her new memoir as a print book at: https://www.createspace.com/4289356
and also as an eBook on Amazon Kindle.